Brief: To demonstrate the power and versatility of the Barclaycard PayBand; combining Cashless Payments with other audience engagement activities. 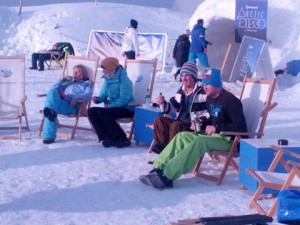 Barclaycard demonstrated the strength and versatility of their PayBand at the Barclaycard Snowbombing Artic Disco in the most challenging of conditions; at an altitude of 6,000 feet, and in temperatures falling to -18°C.

This exclusive event had only 300 guests each night, who were whisked by cable-car to a private disco in the White Lounge igloo at the top of the Ahorn Mountain. These were truly very special events, with Kasabian as the headliners one evening, and the limited tickets selling out shortly after release.

Guests were able to link their PayBands to their Facebook accounts so, as they checked into the cable-car, they could automatically share their excitement with their friends. Our roaming photographers were also at the top of the mountain capturing some brilliant snaps that guests could post to their walls with a mere tap of their PayBand.

Also at the top of the Ahorn, the Paybands could be used to buy drinks cashlessly at the two bars, useful when you don’t want to fumble with change when it’s minus 18! Meanwhile the bar owner could watch the sales receipts for each bar in real time, allowing him to see just how well the event was going.

You can see some of the Barclaycard Arctic Disco fun and the In-Site technology in action in the video above. A magical event in an amazing location!